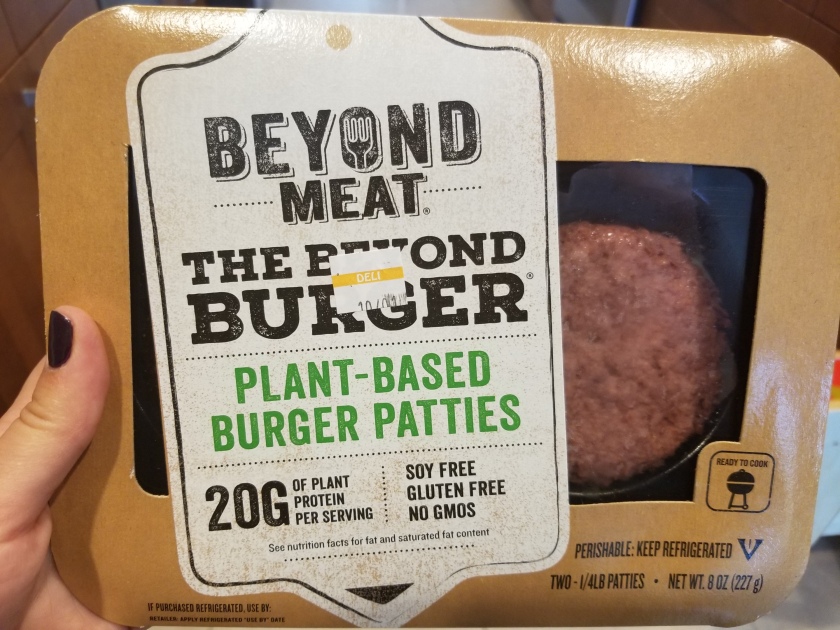 For those of you following the plant-based meat craze, you must already know about Beyond Meat, likely have tried them, if not even have them in your regular meal rotation.  I know I’m late to the party reviewing them.  However, if you haven’t jumped on the bandwagon yet, then this review is for you!

Beyond Meat products are 100% plant-based protein that are meant to replace current meat products like hamburgers, ground meat, sausages and chicken strips.  For purposes of this review, I am focusing on The Beyond Burger.  They are made from a combination of pea protein, canola oil and coconut oil.  Sold in a 2-pack of patties right next to the fresh beef patties at the grocery store, they are strategically working to change the meat section to the “Protein Section.” As part of their vision, The Future of Protein, they are providing consumers with alternatives where they are used to shopping.

They produce seven products right now: The Beyond Burger, Beyond Sausage: Brat Original and Beyond Sausage: Hot Italian, Beyond Chicken Strips: Grilled and Beyond Chicken Strips: Lightly Seasoned, Beyond Beef Crumbles: Feisty and Beyond Beef Crumbles: Beefy.  The sausages were in such high demand that it took us weeks and calling ahead to our Whole Foods to finally get our hands on them because they would run out as soon as they were stocked.  Most of their products are widely available at grocery chains nationwide.  Click here to find a retailer close to you.  They are also partnering with various restaurant chains and have their products available worldwide.

This is an extremely exciting time in the meat-alternative business.  I was a vegetarian for years and other than the Boca chicken patties I never liked any of the meat substitutes.  I found the tastes and textures wrong.  But with new technology and an increased demand in environmental sustainability and consumer awareness, the market is exploding.  If only this was a viable cheese-alternative review.

First of all, I would like to state that I have never been a big hamburger eater.  I’ve always opted for the chicken when given the choice.  However, we have become a turkey burger family.  My point is, my opinion might not be as noteworthy as someone who eats beef burgers regularly.

These are fresh patties, so when grilling them I treat them the same as any other.  We barbecue them and use lettuce wraps with various condiments.  They are really flavorful so you don’t need very much.  In fact, with turkey burgers I always add cheese but I don’t with these because I don’t want to take away from the flavor.  They are thick but cook up quickly – four to six minutes per side.  The only downside I can mention is that I have not yet mastered the cooking time and temp.  Maybe partly because I’m cooking them alongside turkey burgers (which our kids get) and those take longer, but also because of what they’re made from.  If you cook them directly over the flame they drip and will cause a flare up and burn them.

They taste fantastic.  Did I mention that?  They are textured but not dry at all and they don’t taste like any meat substitute I’ve ever had.

The Beyond Burger is $7.99 for a two-pack whereas regular beef patties can be as low as $4 at our grocery store (and even less if you buy them in bulk).

WHAT PROBLEM DO THEY HELP SOLVE?

The Beyond Burger is intended to replace beef hamburgers.  This is significant because there are approximately 50 BILLION hamburgers consumed in the U.S. each year.  That comes out to about 3 burgers per week, per person.  They’re cheap and delicious, according to those who enjoy them.  So what’s the problem?  An investigative report released through PBS  revealed these disturbing facts about beef and hamburgers:

This is insane!  I’m blown away by how much land strain, resources used and pollution result from beef production.  I really had no idea.

So how do the Beyond Meat burgers stack up?  According to their website, these burgers use less water, require less land to produce, produce less greenhouse gasses, and require less energy.  And not just a little less.

This is not even going into the health and ethical reasons for not eating beef.  Worried about antibiotic resistance?  According to an article from CNN, “the CDC has reported that every year in the United States, at least 23,000 people die and 2 million get sick with antibiotic-resistant infections.”  Beef suppliers use antibiotics to reduce illness in their cattle but they are also using them for disease prevention and reportedly to make the animals grow bigger.  A recent study showed that the majority of fast food restaurants have received a failing grade in response to their antibiotics use and commitment.

Beyond Meat isn’t the only plant-based protein company out there.  Impossible Burger is another company who approached the market from the other side, partnering with restaurant chains.  I have tried the Impossible Burger and it does taste very close to a beef hamburger, as I can recall.  They’re flatter, wider and a bit more crumblier.  If you like the taste of beef, I believe you wouldn’t be able to tell the difference between them.  I had one recently at Ruby’s Diner.

The protein section at our grocery stores will be getting more competitive in the near future.  Impossible Burger has plans to sell their burgers to grocery chains.  But there is an even bigger idea in the works.   A possible game changer.  Something called “clean meat,” meat created in the lab with animal cells.  This is still in its testing phases but it sounds really promising.  It would be real meat with no live animals involved, no antibiotics or bacteria, an almost limitless potential for a variety and proprietary range of flavors, and maybe even less health risks as our current meat (that maybe be just wishful thinking).  All of these new protein initiatives are receiving investments by big names and companies such as Tyson Foods, a former McDonald’s CEO, Cargill and Bill Gates.

Beyond Meat is transparent about their product, which gives their customers trust and shows real commitment on their part to do actual good.  They commissioned an independent study earlier this year to compare how their products stack up against their beef competition, as well as provide benchmarks for how else they can improve.  To read the report, click here.

One non-environmental thing to consider is that since these patties are made from pea protein, pea being a legume, someone with a peanut allergy might possibly have a problem with them.

DO I RECOMMEND THEM?

Absolutely!  These are delicious!  These will be part of our regular meal rotation.

Kimberly is a stay at home mom of two preschool children. She worked in product development, brand management and licensing for toys and games before temporarily retiring to pick up and step on said products.