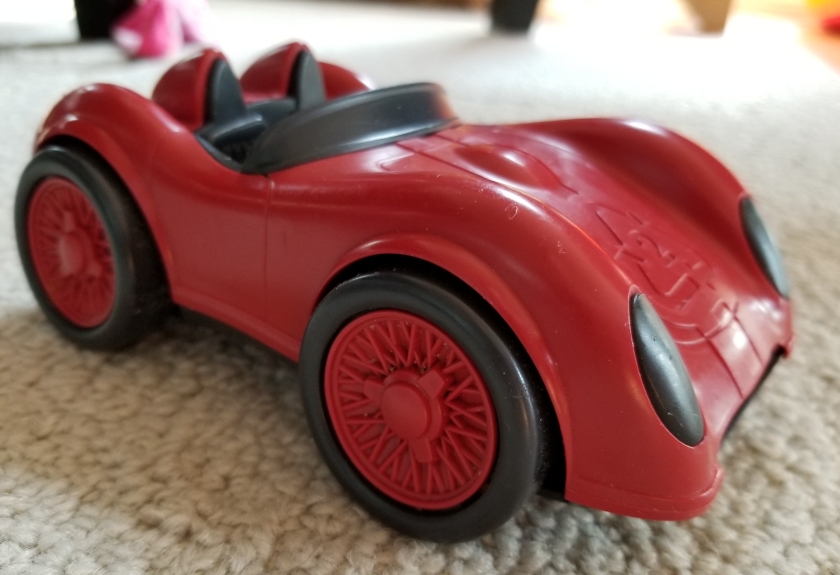 Green Toys has been on my radar for years, way before having kids.  I met the founder, Robert von Goeben, at Toy Fair (an industry trade show), 10 years ago or so.  He gave me a red race car and told me they make products made from recycled water bottles.  No metal parts.  No batteries.  No glue.  No paint.  Plastic made from materials deemed food grade and water safe.  A seed was planted for me then, that there could be toys produced that could be recycled.  Toys that wouldn’t destroy the environment and you could feel good about.

After having kids myself, they are now a part of my world in a more personal way.  We have received and given many Green Toys products as birthday presents.  We have the dump truck, helicopter, tug boat, indoor gardening kit, shape sorter and recently received the airplane as a birthday gift.  This was a no-brainer product (line) for me to review.  In fact, sort of a freebie because I already know that I love them.  So… I’m selfishly kind of promoting them because I want everyone to know about them and buy their toys.

Green Toys has a wide array of play things including cars, blocks, role play, outdoor, dough and even tableware.  Available worldwide, you can find them in the U.S. at specialty retail shops, museum gift shops, and discount chains such as TJ Maxx.  They have a shop on Amazon and are available on their own website.

Green Toys are made from 100% recycled plastic.  Mostly milk jugs but also other items such as yogurt cups as needed.  On their website as of this publication they state they’ve recycled 56,372,751 plastic milk jugs!  They are made in the U.S. and use very little to no plastic in their packaging as well.

These are great.  They go from our living room, to the bathtub, to our sandpit outside and back again, with no worries about rust or toxins leaking into the bathtub.  They are sturdy with bright colors, a nice feel and texture, and well-functioning features.  Parts move smoothly and we have not had anything break or tear or malfunction in any way.

My son’s current favorite is the helicopter.  It’s a nice size and it has many areas for him to hold on to.  But really, all of the toys we’ve had have been favorites at some point or another.  The tug boat is fun in the water as you can fill it and dump water out, as well as have other bath toys ride on top.  The dump truck is very useful and has been used inside the house for races, dumping, transporting, and even used as a school bus.  We tied a shoe string to it so they could pull it around the house.

They are very competitive in price to comparable toys made of traditional plastic materials.

I want to give a huge shout out to them for daring to go where few toy companies dare to go: vehicles for girls.  I realize one stereotype gives way to another (do all girls really like pink?), but my daughter does love pink and she will play with many of her younger brothers vehicles, dinosaurs and other toys that are traditionally marketed to boys.  Also, (gasp) some boys like pink!  It’s very likely that these are not their number one seller, but I appreciate the choices.  So, pink race car?  Check.

Their vehicles, at least the ones we have, are good for younger kids – I’d be hesitant to gift most of these to a child over 5.  I don’t know about your kids, but at this toddler age we are deep in the Little People world.  My kids also use bath toys to play as people and talking animals.  But none of these figures will fit in the figure spots in the Green Toys.  It was a source of frustration for my kids that they couldn’t get their figures to ride the planes and trucks.  Having the figures lock in place so they don’t fall out is very important.  However, knowing that in a kids world toys are interchangeable, it would be nice given the closeness in scale to the other popular figures to consider how to accommodate the design in such a way that it might allow for interchangeable play.

Another, very specific, gripe I have is with their indoor gardening kit. I was beyond excited to get this as a present.  And it worked – we are still growing carrots in our garden from their seeds.  The kit comes with three flower pots and a tray for them.  You grow them indoors and then transfer outside once they start growing.  However, even a novice gardener like myself knows you need to be able to drain your soil and the flower pots do not have holes in the bottom.  My husband ended up drilling holes in them so we can continue to use them as flower pots.  Nit picky comment, but it seems like a design flaw and not very well thought out.

As they continue to expand their line, I’d love to see them consider scale.  The lower price point segment would offer a way to expand into impulse toys.  If lower-priced, novelty toys are not going away for consumers, then perhaps having toys that could be thrown into the recycle bin instead of the trash would be beneficial and a point of difference.  And on the opposite end of the scale, competing head to head with the blow-molded jumbo play sets (like play kitchens, ride-ons, etc) would make an interesting statement.  I don’t know how the material holds up to the demands the larger pieces require but it would be nice to know this ginormous piece of plastic will not be sitting in the landfill for the next 500 years.  Those items would add little to their bottom line, but they would make a nice statement and add to the brands perception about durability.  I will admit that living in Los Angeles is sometimes a bubble and given my recent experience in a small town in Tennessee I realize recycling is not as common as I thought, but at least having the option is better than not.

They recently partnered with Sesame Street for some outdoor toys which appears to be their first foray into licensing.  This is a great way for them to reach a broader audience and grow their business.  I hope to see more of this in the future.  Given that they produce products that compete with traditional toys and toy companies, such as vehicles, they might have a harder time obtaining licenses.  But I’m really interested to watch how they expand.

WHAT PROBLEM DO THEY HELP SOLVE?

Laura Trotta, a leading expert in eco-living posted some good points about the downsides of toys, which I will use (although I have rephrased a bit) to discuss how Green Toys products address the environmental impacts of traditional toys.

Toys are designed to be short-lived and are basically landfill.  As further discussed in the Global Toy News article “Too Many Toys? One Study Thinks So,” one of the focuses for the American toy business is on price and not quality.  This drives development and promotion of toys towards more low-priced, throw-away toys.  Don’t get me started on birthday party favor junk.  It’s basically consumers paying to transport trash from one location (the store) to another (the trash) with a few minutes of playtime for your kid in between.  For those who know what goes into making a toy, it’s mind blowing how much time is spent making this stuff, getting it sold in, promoting it and how little is spent in the consumers hands.  Green Toys products are sturdy and have lasted us 4 or 5 years so far with no signs of breaking or slowing down.

Toys are usually made from plastic which takes a ton of oil to produce.  Green Toys products are made from recycled milk jugs, which involves no oil whatsoever in the process of taking the milk jugs and other plastics, cutting them into pellets, and melted to make the toys.

Packaging waste is a big problem with toys from the cardboard, ties and plastic wrap.  Green Toys uses a large portion of cardboard packaging and prints using soy based inks.

Batteries in toys can create an environmental disaster as many batteries are not recycled.  Green Toys products use no batteries.  Or other metals that can rust and leak chemicals into the ground.

DO I RECOMMEND THEM?

Yes!  For the next birthday party you have or come holiday time, I highly recommend considering them.  You can feel good about giving these as presents or to your own kids knowing that you are not harming the environment.  They are one of the few plastic toys you can let your young one and two years olds play with and not worry about.  And the kids will love them!

Kimberly is a stay at home mom of two preschool children. She worked in product development, brand management and licensing for toys and games before temporarily retiring to pick up and step on said products.